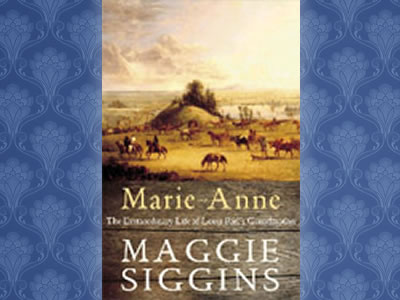 Available in bookstores throughout Canada.

Marie-Anne Lagimodière was the most extraordinary Canadian woman of the 19thCentury. Grandmother to the great Canadian Reformer Louis Riel, her courage and passion would profoundly influence him.

Beautiful and spirited, Marie-Anne rejected suitor after suitor until she was 26 – a rebellion that was unheard of in 1800s Quebec habitant society. Then, shortly after her marriage to the handsome coureur de bois Jean-Baptiste Lagimodière, Marie-Anne insisted on accompanying him back to the uncharted wilderness of western Canada. The year was 1807, and no white woman had tackled the fierce wilderness of Canada’s fur-trading country. Marie-Anne travelled almost 3,000 kilometres by canoe brigade, facing tumultuous rapids, portages, and deadly storms on the way to the Red River Valley. She packed a flatiron for the voyage, a disturbing sign that she was woefully unaware of what lay ahead.

They arrived in the midst of tribal warfare triggered by the fur-trade economy, and fierce rivalry between the North West Company and the Hudson’s Bay Company. Marie-Anne would experience near starvation at cramped fur-trading forts but also joyous summers hunting buffalo with Jean-Baptiste on the prairies. As she settled into life among the Aboriginal people, she soon traded in her dainty shoes and dresses for the caribou-skin leggings and embroidered moccasins. She gave birth to her first four children Indian-style. She learned to make pemmican and became fluent in Ojibwe and Cree. Eventually she and Jean-Baptiste helped with the establishment of Winnipeg and became successful farmers and entrepreneurs.

What the Critics say:

Siggins has a keen eye for high drama and infuses her narrative with very juicy (very un-Canadian) smatterings of sex, stench and gore.”
— Globe and Mail

“An accessible and thoroughly researched story of a woman of great courage.”
— National Post

“A must-read for every Manitoban. It is a part of our history; an intimate look at the Métis leader who helped shape our province.”
— Winnipeg Free Press

“This book shows Marie-Anne Lagimodière to be one of the most enigmatic figures of Quebec, and Canada, in the 1800s.”
— Ottawa Citizen

“Siggins’ newest book is far from just a sober account of a pioneer life – it bursts with memorable, sometimes humorous, anecdotes…A worthy spinoff of Riel and a robust read about an adventurous Canadian woman pioneer of the 19th Century.