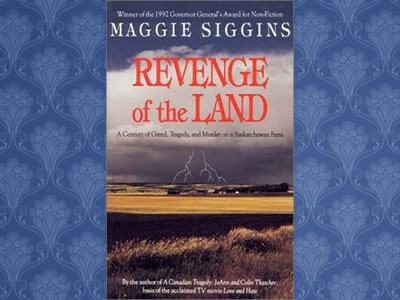 Made into a CBC four-hour dramatic miniseries

In August 1987, a grisly murder took place on a farm near Moose Jaw, Saskatchewan. A teenaged boy shot and killed his grandparents and then spent the month partying with his brother and their friends. Only when the neighbours noticed that the crops were not being harvested did they become suspicious.

Maggie Siggins set out to investigate the case, but, before long, she began tof eel that the central character was the farm itself – especially when she uncovered the hardship an disaster suffered by those who tried to tame this section of land. She decided to tell the story of all the previous owners of the same section of prairie. The result is the uncovering of how the West was really won and by whom.

What the critics say:

What makes them [these lives] so forceful and vivid is Siggins’ uncanny ability to dig out dramatic details. Her 24-page bibliography explains where she got the material, but nothing except genius can tells how she found the dialogue…In her superb chronicle, vengeful land is but the background, shimmering to the surface of her story here and there, becoming in the end the most memorable character in an unforgettable saga.

[Siggins} made a commitment that “no matter how uneventful or commonplace, the story every person who owned even a part of that land from 1883 to the present would be faithfully chronicled.” And she has done it superbly…Perhaps Siggins’s greatest accomplishment is to find extraordinary qualities in apparently ordinary people when they are pushed to the limit.”

..a prodigiously researched, fascinating history of the settling of the prairies.

Revenge of the Land is required reading. It’s an epoch of Canadian history that was, not matter what veneer of nostalgia is pasted over it, a massive, well-orchestrated, and thoroughly cynical land scam. Siggins has written a book that is difficult to put down.

The first hint that Revenge of the Land is a gold-plated winner came, on family vacation, when my sister latched onto the manuscript and wouldn’t give it up. She had good reason. It is truly a book you don’t want to put down.

Siggins’s publishers calls this one “a gripping saga of greed and tragedy, a history of the prairies presented through the stores of ordinary people” and, for once, this is not just publisher’s hype, but a straightforward description of the work.

Excerpt from Revenge of the Land:

Albert Slywka insisted that, before returning to Regina, his daughter drive him to the northern part of the Eberle farm. He wanted to look at the fields where Frank grew his money-making flax. “A wonderful farmer was Fran. A very well-to-do farmer. Would have done anything to keep the farm in the family. He loved that land more than his life, I guess.”

Clara Turner did not tell the old man what she had heard that day. As the polce were searching that same field, they had spotted something that stopped them in their tracks. In rigor mortis, Frank’s hand, as white as a prairie primrose, had popped out of his shallow grave and seemed to be waving at them, pleading for help.