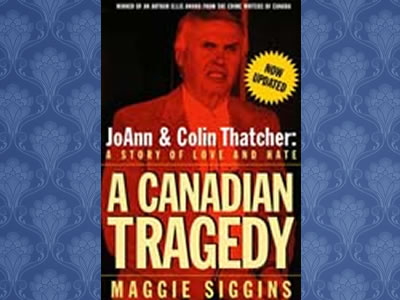 MacMillan of Canada, 1985,  Winner of the Crime Writers of Canada, Arthur Ellis Award.

Winner of the Crime Writers of Canada, Arthur Ellis Award, 1985

Made into a 4-hour dramatic miniseries “Love and Hate” broadcast by CBC, CBS, BBC and over 50 countries around the world.

Colin Thatcher was a golden boy, the son of a former premier of Saskatchewan. Eventually Colin launched his own political career. But, as he rose to prominence and to a seat on the Saskatchewan cabinet, all was not well at home. His marriage to JoAnn, the mother of his three children, unravelled amid rumours of infidelity and of domestic violence. JoAnn divorced Colin, married again, and moved to Regina. In 1983 she was attacked with a sickle and then shot to death in the garage of her home. In 1985 Thatcher was found guilty of first-degree murder and sentenced to life.

London Free Press: A consummately researched book that puts not only Thatcher but all the other plays in this bizarre real-life soap opera into prospective.

Books in Canada: A Canadian Tragedy…ranks up there at the very top of the heap.

Globe and Mail: A fascinating portrait, with as much intrigue, skulduggery, glamour and cruelty as a sason of Dallasepisodes on TV.

Calgary Herald: Siggins’s book performs the miracle of making you feel that she was there, witnessing every event in its entirety.

Macleans: Combining the zeal of an investigative reporter with the tenacity of a Crown prosecutor, Siggins reconstructs the case against Thatcher with an elaborate web of evidence gathered from the courtroom and her own extensive research…By accumulating those extraordinary facts, A Canadian Tragedy turns from document to thriller.

Quill Quire: A Canadian Tragedy is cast in the tradition of Truman Capote’s In Cold Blood.

Excerpt from A Canadian Tragedy:

Thatcher liked to brag that he felt just as much at home in banker’s apparel as he did in a pair of jeans and cowboy boots, and on the occasion of his bail hearing he decided the urbane Colin Thatcher would be more likely to impress the judge. He wore a proper royal blue suit, a crisp white shirt, and silk striped tie. As was fitting for a proud man of influence, his emotions remained invisible. Indeed, during his many court appearances Thatcher seldom lost his composure. His face seemed set in porcelain, like the tragic twin of Thespis’s famous dramatic masks, an image reinforced by the extreme downward turn of his mouth. Even when he smiled he appeared on the edge of a snarl.