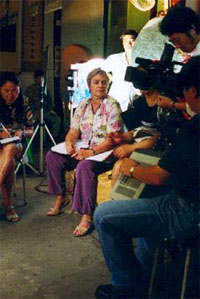 Maggie Siggins is an author and film producer who has worked as a reporter, columnist, magazine writer and news editor. She has written twelve books. Her early work includes A Guide to Skiing in Eastern North American, How to Catch a Man with cartoonist Ben Wicks, Bassett, and Brian and the Boys: A Story of Gang Rape. In 1985 she wrote Canadian Tragedy, relating the events that lead to the murder of JoAnn Thatcher by her husband Colin. Another murder was the centre piece of Revenge of the Land published in 1991. Riel: A Life of Revolution was the best-selling biography of Canada’s one great revolutionary. In Her Own Time told two tales: the fate of a grade 13 class, and a cultural history of women through the ages. This book was followed by Bitter Embrace: White Society’s Assault on the Woodland Cree. In the Fall of 2008 her biography of Marie-Anne Lagimodière, Louis Riel’s grandmother was published by McClelland & Stewart. Maggie’s first book of fiction Scattered Bones was published in 2016, and she has completed a second novel, Dragon Lady’s Daughter.

Maggie is the vice-president, creative of 4 Square Entertainment and as such has written and produce many films for that company. The Life and Times of Gordon Tootossis won the best documentary feature at the Fargo Film Festive. Unhealed Wounds, the first in an eight-part series, Scarred by History, was nominated for “Best Historical Documentary” at Toronto’s International Documentary Film Festival. The second episode, Nanjing Nightmares was nominated for two awards at Canada’s Yorkton Film Festival — Best in Saskatchewan and Best Historical Documentary. It was also nominated for Best Script at the SMPIA Showcase Awards. She has written a dramatic adaptation of Bitter Embrace and acted as story editor on the feature documentary Silent Bombs: All for the Motherland, which has numerous awards including a Gemini for cinematography. 4 Squares latest film, Invisible Threat, has been shown around the world. It describes the horrific possibility of  biological warfare.

Maggie was the chair of The Writers Union of Canada, served on the Saskatchewan Arts Board for seven years and has sat on the steering committee of Friends of Canadian Broadcasting.