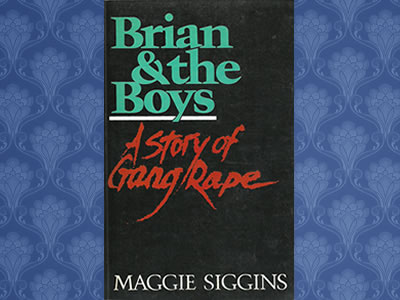 This is the story of a generation that went bad. Of six guys who lived for booze and dope, sex and rock. When they finally had their showdown with the Law, they decided to sink or swim together. They sank.

What got Brian and the boys in trouble were two women who said the gang lured them back to their Toronto hangout, then repeatedly raped and abused them. It didn’t look good in court: two women who had never met each other had been able to quickly pick Brian and his buddies out of a group, and gave strikingly similar accounts of how they’d been terrorized. The prison sentences totalled eighty-seven years. Yet to this day the men maintain they are innocent.

What makes men commit such brutal crimes against women? How should the justice system deal with them? These are the questions Maggie Siggins sought to answer by investigating the events of April 23 and May 15, 1979, and by exploring the backgrounds of the Lauder gang and the women they victimized. But as she delved into the incredible web of allegations, lies and inconsistencies that surrounded the stories of the rapes, the ideas of “aggressor” and “victim” became much less useful, blurred by a cloud of questions about what really happened on those two evenings.