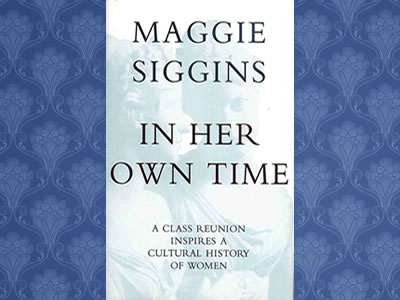 Harper Collins, 2000, winner of the City of Regina Book Award.

The class of ’61, R. H. King Collegiate. These were the women who were born during the war, had come of age in the 1960s and were forced by the women’s movement of the 1970s to reassess their roles in life. They had stood at the forefront of one of the greatest revolutions in history – the emancipation of half the human race.

Maggie Siggins set out to write their stories. But the themes that emerged provided a gateway to explore women’s lives throughout history. In Her Own Time became nothing less than a cultural history of women in the Western World from antiquity to present. In an engaging and intimate narrative, Maggie investigates the role of women over two millennium.

By linking her classmates’ personal journeys with those of women throughout the centuries, Siggins has created a device for readers to identify with many of her characters and also to project her own experiences into the historical mix. This is why In Her Own Time is not only a fascinating commentary on women’s cultural history, but is, at the same time, so admirably accessible.

If you were born in the ‘40s you will surely be riveted by these twisting lives, floored by their eerie reflections. If you’ve always said your life would make a good book, well, it did. In most of the 23 biographies, the idea that truth is stranger than fiction rings true…

The charm and original value of the book is putting Mary Wollstonecraft and Mary B. from Scarborough side by side, making the links between the great women of history, seldom recognized in their own time, and the ordinary women of Canada…[it] is an original and thoughtful concept, delivered in Siggins’ clear matter of fact style and language.

…the book is an eye-opener. Not only is Siggins a readable stylist, she opens doors through her documentation to a wealth of women’s history.

It [In Her Own Time] makes compelling reading, by turns tragic, laughable and ludicrous.”

The book’s gripping historical documentation, coated against indigestion by the life stories of the R. H. King women, is wholly compelling, and not just for women in that neither-here-nor-there class of ’61. Just about everybody’s likely to be startled and instructed – not the least men, or younger women who imagine the current state of affairs is the beginning and the end of the story.

Contrasting the stories of women of the 20th century feminist revolution with those of ancient times, and the early modern era, makes for effective historical writing.

Excerpt from In Her Own Time:

In the interviews I conducted, it became apparent that a major thread ran through each woman’s narrative, a leitmotif that coloured her life. These themes would involve relationships: sons, daughters, lovers. Or cultural interests: beauty, or athletics or religions. Or careers. Among this group were teachers, nurses, artists, physicians, professors, ministers. Why not, I thought, peer back into the historic past and, through a discussion of these topics, try to chart the up-and-down progress of the so-called second sex? What emerged is not only a collection of contemporary life stories but a cultural history of women in the Western world from antiquity to the present.

Women have always lived productive and worthwhile lives. Century after century they have overcome the misogyny that stained their existence, and some have managed to soar far above it. It is these ancestors who must not be forgotten by contemporary women. We, who are positioned on the cusp, our feet in two very different worlds, understand the historical conflict more than our mothers and our daughters. In the major themes that run through our lives can be heard echoes of women’s struggle and victories, beginning from antiquity and running, pell-mell, through the ages. We, who are so lucky to live when we do, have a duty to understand and acknowledge our history. There must be no complacency, no backsliding by the next generations.