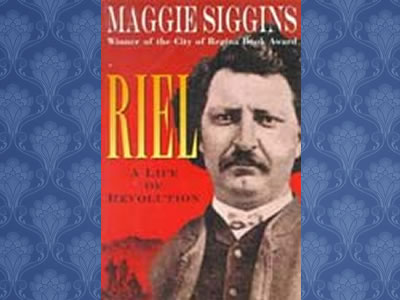 Harper Collins, 1994, Winner of the City of Regina Book Award.

Winner of the City of Regina Book Award

With each generation his persona has taken on different colours and nuances – an unrepentant traitor to Canada, a messianic prophet who led an unsuspecting people astray, a pathetic tyrant unfairly executed because he was insane. In this intimate biography Maggie Siggins uncovers the real Louis Riel – a complex man full of contradiction and angst, a charismatic visionary and poet, a humanitarian who gave up prestige and wealth to fight for the Metis people.

Unlike most of the authors who have preceded her, she allows the man to speak for himself, placing him firmly in the Prairie landscape that was his mental habitat. Her writing style emphasizes the drama of the occasion that punctuated his brief flowering, but it’s her power of understatement that brings them alive. This is a very good book.

Objectively and in their time Riel and Dumont were failures. Yet astonishingly they have survived and grown in our memories, and it is for reminding us so thoroughly and with such empathy of the man Riel that we must be grateful to Maggie Siggins.

No unprejudiced reader can fail to be moved, enthralled, enlightened and informed by this fascinating portrait of one of the most interesting and influential men in Canada’s past.

Justice has never been done to Riel, but Siggins goes a long way toward it. Her portrait, proudly parties pris, will stand as rounded, necessary and a challenge to accepted history.

Maggie Siggins has done us all a great service by providing what I make bold to say is the most readable and accessible account of Louis Riel’s life so far offered. Though I approached her book with some trepidation (having had about my fill of academic Riel bone-pickers), I whipped through Siggins’s 500 pages in next to no time. I found it as fascinating read.

Excerpt from Riel: A Life of Revolution:

The very essence of Louis Riel is contradiction. He was a handsome, smartly dressed, highly-educated prude who enthralled his adoring constituency, the illiterate, risk-taking, pleasure-loving Métis buffalo hunters. His was a conservative political philosophy and yet he led a desperate, violent rebellion against the political establishment he once supported. He was a devout Catholic, yet his heart-felt religion was laced with Indian spiritualism, and he didn’t hesitate to thumb his nose at meddling clergy, who promptly labelled him a heretic. Most important: only one branch of the Riel family shows Indian heritage – his paternal grandmother was a mixed-blood, all his other ancestors were French Canadian – and yet he symbolizes to this day the courage, pride and accomplishments of what is now seen as the Métis golden age